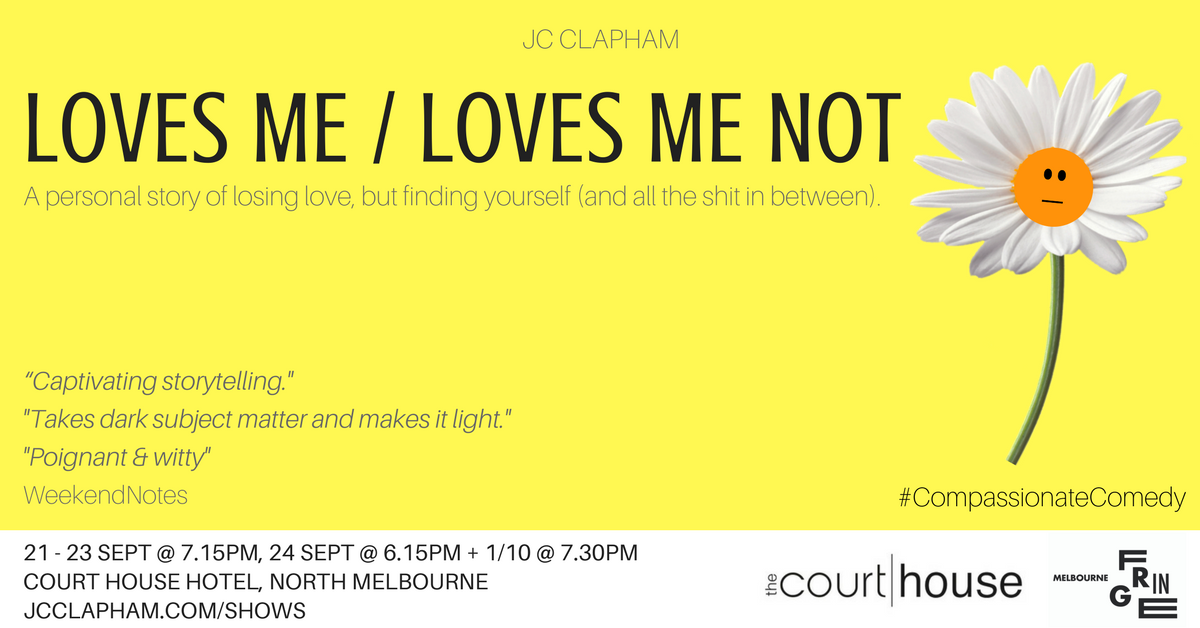 Review of Loves Me/Loves Me Not by Vera Poh of Melbourne Arts Review.

JC Clapham tells us quite a lot of stories in his new story-telling comedy, many of them funny, some of them poignant, all of them heartfelt.

Loves Me/Loves Me Not is a self-deprecating, charming, bone-deep portrayal of falling in love, losing it, finding oneself, plus all the heartaches and joys snuggled up in between.

It is a portrait of disappointments and loneliness, shrouded under the impenetrable cloud of depression, wonderfully performed by the 35-year-old on the back of his successful debut with Humpty Dumpty Daddy.

Joel first encountered his (now) ex-wife 12 years ago through a working colleague who encouraged her visiting niece to contact him. On meeting her, the young man found himself at once enamoured by the guest’s various idiosyncrasies.

So, after a fairy-tale romance the love-birds tied the knot and went on to have three (premeditated) children. It was around the arrival of their third child, however, when things started unravelling, as familiar dark clouds began again to descend upon him. Arguments ensued, views diverged, and 18 months later with mutual agreement, the couple decided to part.

As anybody who has experienced break-ups will no doubt understand, the twilit liminal region between pair-bondedness and single-hood is probably one of the hardest to navigate.

In his city bachelor’s pad Joel has turned to his pet-turtle for company. And, to find love again the handsome millennial has also returned to the dating scene, that invariably brings along new feelings of frustration and loss.

In this meditation on identity and reflection, delivered with delicate wit and humour, we relate with the intricate fabric of one talented man’s story, and witness his exceptional capacity for confidence and candour.